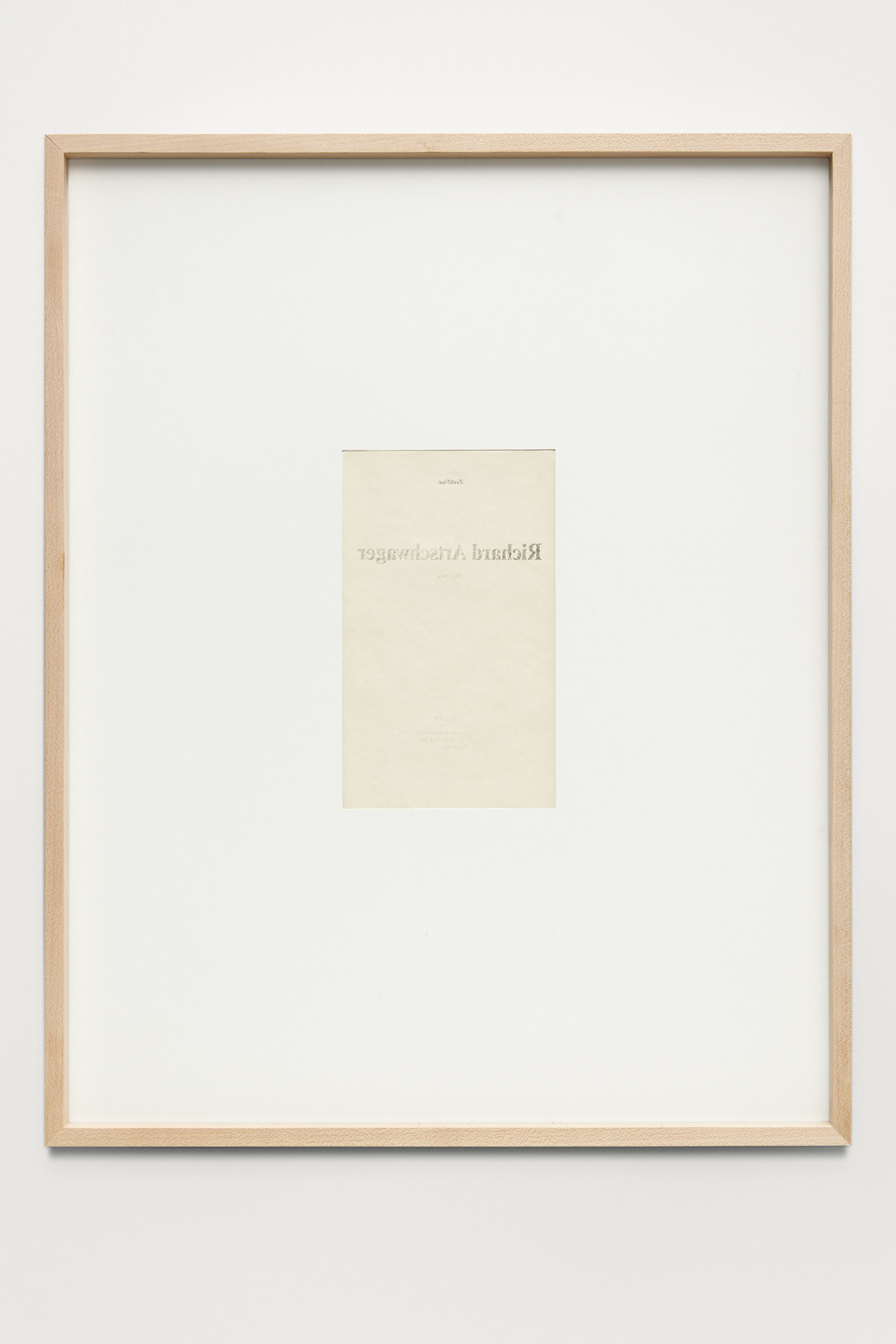 Of Parerga and Paratexts: Max Schaffer's Edges between Text and Image

After his solo exhibition Beschreibungen, Definitionen, Auslassungen [Descriptions, definitions, omissions] at the Hamburg Kunstverein in fall 1978, Richard Artschwager followed tradition by creating an annual artist’s edition for the institution. It continued his blps series begun in 1968. The title, an abbreviation of “blips,” can be understood both visually and aurally. Artschwager’s blps were spatial markings, the forms of which, according to the artist’s description, put you in mind of a large Frankfurter sausage cut through longitudinally. Consequently, the special edition object consisted of a twenty-cm-long round wooden hybrid between a sphere and a cylinder painted matt black. Fixed diagonally to the wall with its accompanying screw, it looked like an inflated grip or handle that had taken the wrong door.

The edition was accompanied by a “certificate,” as the document was titled. The artist’s name was set centrally in upper case letters, below it, smaller, the work title and year. At the foot one read: “Special edition / for the / Kunstverein in Hamburg / Edition: 24 copies / Copy:”. The entire text was centered and lost its balance only when the artist, selling a work, hand entered the copy number after the colon and signed the sheet. With its plainness of arrangement, typography, paper thickness, and paperback-like size, the certificate seemed to have been designed by Willi Fleckhaus, the designer of the Suhrkamp Verlag publications at the time.

Art-historically speaking, the procedure was neither new nor unusual for the period. Certifying art and designing certificates for duplicated art was already established in this form and format by 1978. By listing paratexts such as the personal name, work title, year of origin, institution, or edition—not unlike the title page of a book— it became a supplementary work (ancient Greek “parergon”) to the work proper (“ergon”) whose production the artist did not necessarily have to execute him or herself, it being delegable to others. This gave rise, on the one hand, to an artistic stance that acclaimed the idea of art as an affordable commodity and that both pop art and minimal art allowed for in their distinct transcendings of the borders between high and low art. The procedure, on the other hand, pursued monetary interests that the growing market for contemporary art further supported. The yearly artists’ editions that the German Kunstvereins offered in the season of Advent—still a current practice today—thus stood as much in the service of a democratic ideal as of self-interest.

Artschwager’s certificates would be hardly worth mentioning had not the artist Till Krause salvaged several copies, part signed, part unsigned, from the Hamburg Kunstverein’s trash several years ago. In the course of time, the ink of individual letters had transferred to sheets of tissue paper between the certificates, their fragile transparency turning into a matt, if not blind, mirror image of the text. Only the word “certificate” and the artist’s name could be deciphered easily. Then Max Schaffer, to whom Till Krause handed over his entire find in 2016, had the sheets of tissue paper framed, printed surface uppermost, titled them Untitled (Blip) and put them at the disposal of the Bremen GAK Gesellschaft für Aktuelle Kunst as a—supposed—special edition following his solo exhibition Power of Style displayed there in the summer.

This special edition must be characterized as “supposed” on several grounds. Firstly, it has no potential for mass reproducibility. These are not object multiples of the kind Artschwager had made with accompanying certificates—each is different and thus like an original. All of the six sheets, one an artist’s copy, are also products of mechanical reproduction; each sheet of tissue
paper, however, is original insofar as its certifi- cate is the same but not the selfsame one. What is special about these one-off prints (“monotypes” in technical terminology) is that they were created without author or intention, of themselves, through time’s passage.

Secondly, this edition is not for sale. Schaffer decided to take the word “Jahresgabe” [Jahr: year, Gabe: gift] literally: the GAK loans out an Untitled (Blip) as a gift, free of charge to interested mem- bers, for exactly one year; then it changes hands. The GAK must be informed of its new where- abouts, which must be changed again twelve months later. This agreement is laid down in a contract that future lenders must sign. The relation of the contract to the framed tissue papers is thus like Artschwager’s certificates to his Blips. The certificate as parergon—and this is the crux—has become an ergon, a work, accompanied by a new parergon, the contract. Schaffer’s handling of the related play between reproduction and production, what is found and what is passed on, sample and gift, illegitimacy and legality is striking, as well as how far he takes them, both figuratively and literally.

Parergon and ergon, paratext and text, text image and image text are concepts deriving from various cultural and humanities contexts. In the late 1970s, the philosopher Jacques Derrida used the term parergon to deconstruct Immanuel Kant’s theories and analyzed relevant cases of the ambivalences at the edges of art—from garments around sculptures to picture frames and work titles. Work titles, according to the literary theorist Gérard Genette, are among the “paratexts.” Formulated in his book of the same title (French original: Seuils, 1987), Genette grasped the term as comprising everything that turns the text into a book: the cover including title, names of the author and publisher, the foreword or afterword, acknowledgments, and index. But things yet further from the book can also be paratexts: a press advertizing announcement, for instance, or a subsequent critique.

The concepts of “text image” and “image text” are based less on a theory connected with great names, and stem rather from an interdisciplinary understanding of literary and visual arts. A “tag” is a contemporary example of a textimage. In graffiti jargon this refers to a signature name concealing the pseudonym of a “writer”. A rebus is an old-fashioned example of an image text. The phonetic values of letters issuing from visual depictions lead to a new semantic context: the image of a shy woodland beast [G. “Reh” deer], an apostrophe, and a street vehicle for all and sundry produce the letters RE’BUS. Tag and rebus not only designate image-text relations. Socio-historically, particularly in times of upheaval and in crisis-struck regions, both of these visual codes served as secret languages that only a trained eye could decipher and in this way allowed subverting established rules, laws and censorship.

Parergon and ergon, paratext and text, text image and image text are likewise concepts that enable us to come to closer grips with Schaffer’s work. Grasped as a semantic framework, they at the same time open up interpretative spaces: the artist also succeeds in effecting a “Neuverortung” (Schaffer), a repositioning, among the distinct pairs of concepts by the means of art, a repositioning that is central to Power of Style, even to his entire oeuvre. Schaffer contemplates the edges of art and has his eye equally on the work, the exhibition, and the institution in letting constellations be shifted, media reversed, texts become visible between spaces, and images legible between lines.

It is no coincidence, therefore, that the title (and hence a paratext) of one of the exhibited series contains the word “parergon”: Parergon (Bremer Hängung I–VII). Schaffer seemed to have installed the series arbitrarily in the GAK rooms, on walls, near heating pipes, above electricity cables, even screwed to shelves, sometimes in lieu of the “repositioned” workplaces. The canvases were of enlarged details of analog hand-produced drawings, digital prints of which the artist ordered online, leaving format and image detail to chance. Of course,
Schaffer was not the author of the original drawings—they were produced by a curator of the neighboring Weserburg Museum who parenthetically (as a parergon) scribbled them on email printouts and copies of loan contracts while on the phone.

This time Schaffer himself had found the papers in public space near the GAK—street art, as it were, despite itself. The artist anonymized these sometimes artful, sometimes artless doo- dles by freeing them of most of their text. Not even the title—generally a reliable indicator of intent and interpretation—gives a hint of the draftsman’s identity, alluding instead to the “Petersburg hanging.” This term denotes paint- ings hung frame to frame on museum walls, which in Parergon (Bremer Hängung I–VII), pointing at the creative process, is replaced by a multitude of references to authorship (curator, artist, computer) and techniques (drawing, digital print, canvas, wall installation). And the literal geographical reference to the Hanseatic City of Bremen is evident.

H.B. was another work, specially conceived for Power of Style, that evoked the theory and practice of paratext and parergon. It consisted of an extract from the exhibition press release just published and was read by tourist guides on excursion boats when passing the GAK. With open windows, visitors had a chance to take notice of this link created by the artist between inner and outer worlds. H.B. directed attention at the edges of the exhibition in several respects— temporally between press relase and exhibi- tion, spatially between inside and outside, geographically between water and land, perceptually between hearing and seeing. And yet even for those who knew of its existence, the work, anyway only seconds long, often went unperceived, since the boats passed the building too seldom. Those who saw in the title not Hansestadt Bremen but Honoré de Balzac, on whose birthday Power of Style opened, may catch glimpses of the incredible, invisible, unknown masterpiece, the calamity of which Balzac described in his eponymous short story.

In addition to Parergon (Bremer Hängung I–VII) and H.B., True 2 the Game (I-VII) also operated with a paratext that, compared to the press release, stood at the opposite end of the exhibition: Schaffer had visitors’ book entries from past GAK exhibitions examined by graphology experts and collaged their reports behind specially prepared mats that themselves displayed enlarged details of colour photographs in graffiti magazines. Judgments on private individuals who had once openly published their written judgments of the art exhibited were thus embedded in a sub-cultural, visual-art framing of the low. At the semantic level of the judgment, as also at the formal level of framing, the reversal of text and image, high and low, public and private, interpretation and critique was amplified in a riddling interplay that incorporated nameable, anonymized, and nameless actors in a remarkably coherent concept whose method was left strangely open to chance.

But the work that most strikingly expressed the aspects of parergon, paratext, and text image both visually and textually in the contexts of the Bremen exhibition was the artist’s edition that wasn’t an edition. For Untitled (Blip) is all the more representative of Power of Style as a whole precisely because it was invisible as an exhibit: like the visitors’ book comments on which True 2 the Game (I-VII) is based, Schaffer’s work is an addendum, a supplementary work. It thus reverts to the same determination as parergon as is inherent in Artschwager’s certificate. This view of the processes of authentication and insti- tutionalization of art discloses ambivalences at the edges and frames, where they unfold spaces that the artist explores.

Thus the mirror text image of Untitled (Blip) presents not only a change in reading direction from the regular, correct right to the irregular, gauche left. As Schaffer himself has observed, it is as if you were in a book with your back to the text so that you are looking through a transparent page of paratext to the outside. Contemplation of the text reflects reading the picture, and vice versa.