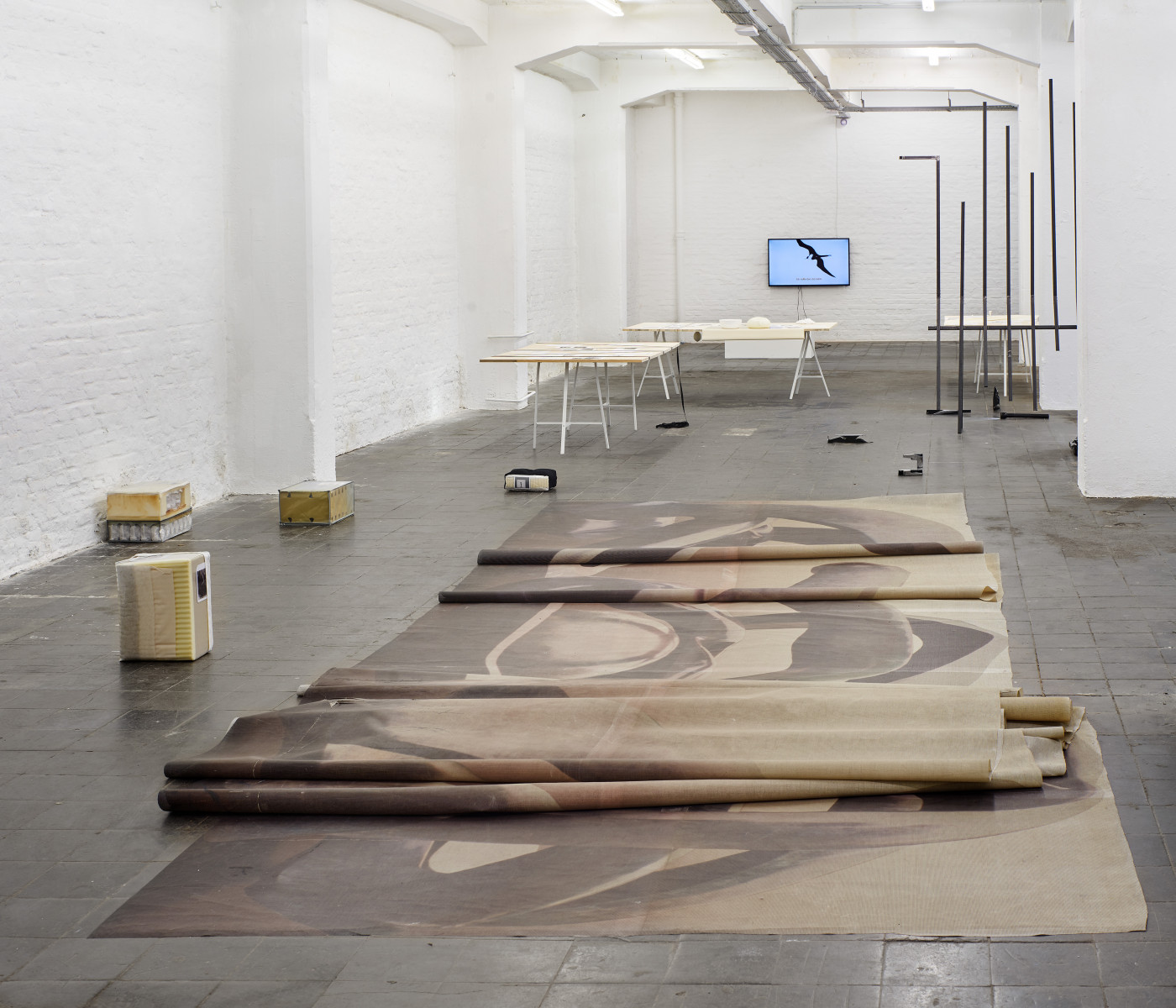 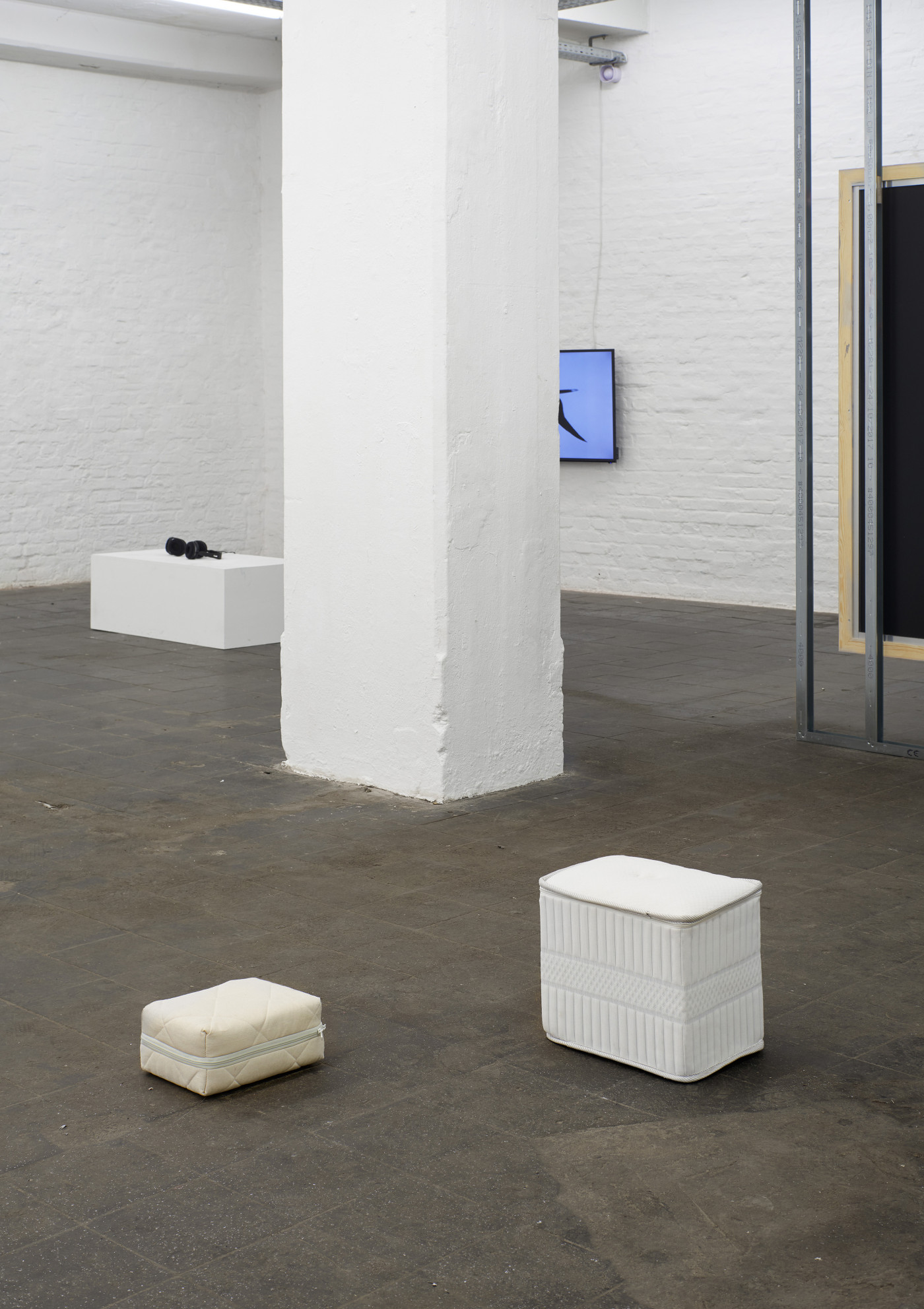 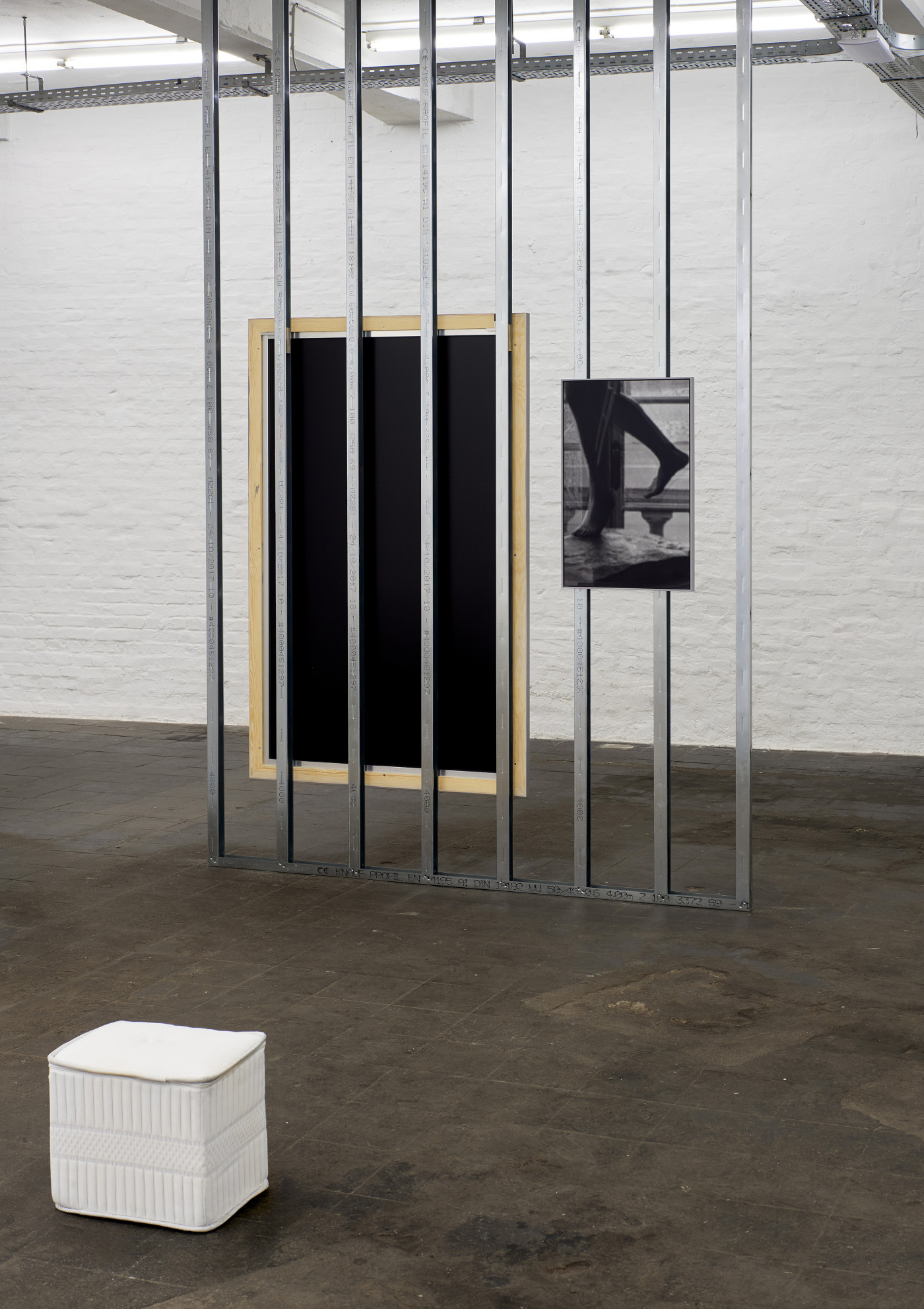 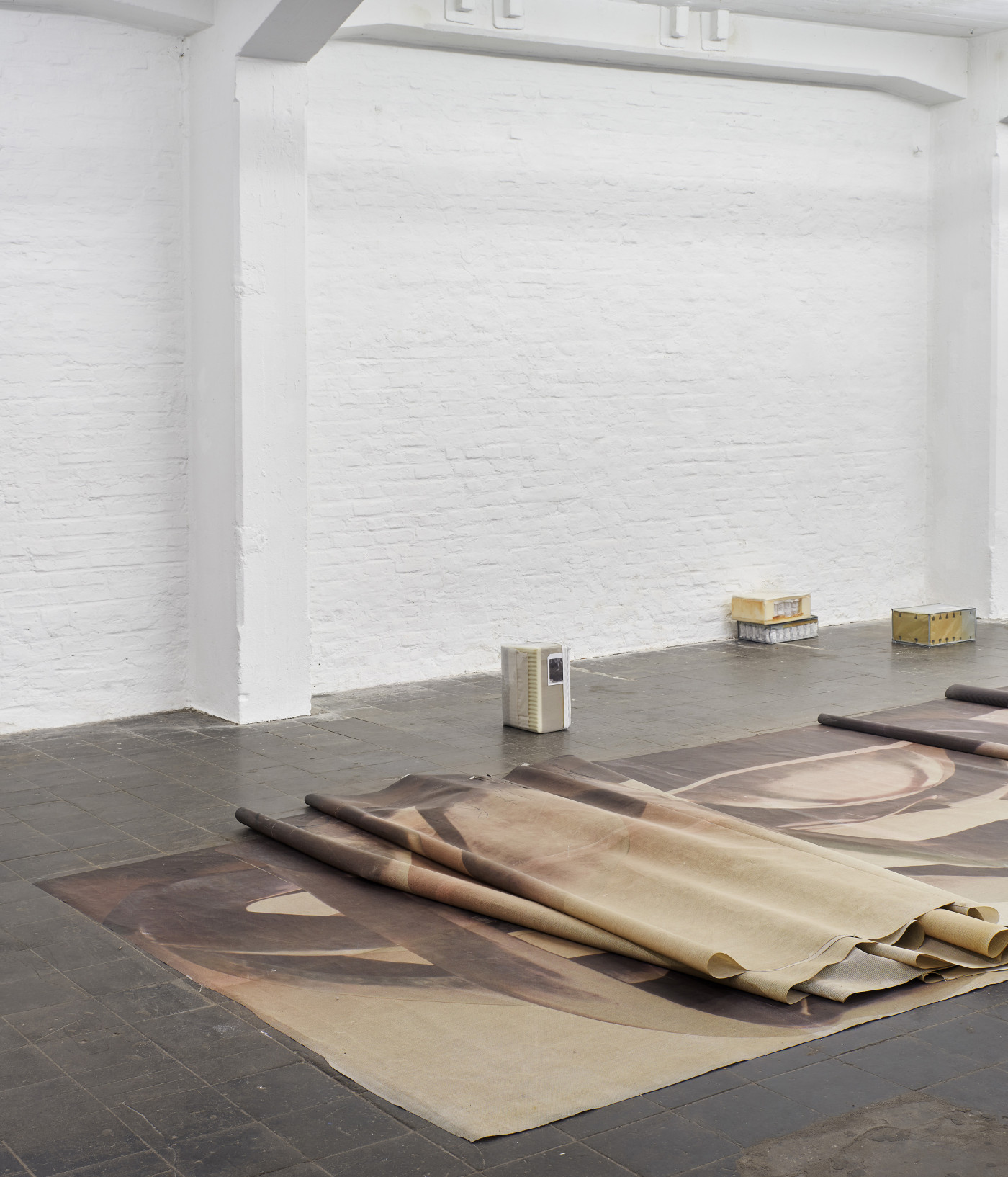 What do forms of intervention look like today, and to what extent is it possible to use them to subvert dominant forms of knowledge? What happens when one’s own critical stance—the disruption, the surprise, and the attempt to defeat expectation—is itself already entirely expected and anticipated? The artists included in the exhibition Field of Codes confound codes and levels of meaning with strategies of intervention, changing perceptions, and transferring knowledge from familiar areas to foreign ones. The exhibition raises questions about authenticity, the character of proof in information, and the tension between fact and fiction in artistic work.

Along with the artists’ works, a publication will be released that can be seen as an extension of Field of Codes—a second exhibition in book-form that approaches the themes artistically attended to in the exhibition space through language. The invited authors’ contributions form a conceptual field that interacts with the creative approaches and artistic preoccupations displayed in the exhibition. Ilka Becker, Hans-Christian Dany, Sarah Kolb, Fiona McGovern, Kerstin Stakemeier, and Marcus Steinweg cover theoretical, activist, medial, and topological areas of inquiry as they come to bear on the exhibition’s theme.

Where Katrin Mayer, Max Schaffer, and Marcel Hiller clearly focus on the conditions of the exhibition space itself, developing the majority of their work on-site, Julian Irlinger reflects on exhibiting as a means of installing a self-to-space relation that is, nevertheless, independent of specific location. Sven Johne and Hiwa K’s videos form their own spaces of reflection.

Katrin Mayer’s approach is a type of archeology of knowledge. It takes up gender political and subcultural histories of a place and—having checked their validity—translate them into a spatial-material formulation. In so doing, she works against the fiction of an allegedly neutral space, betraying the ways that place is constantly intertwined with historical meaning. She reassembles selected traces from her research in such a way as to suggest specific shifts in the way we interpret them. What results are temporary, hybrid settings, whose materiality and manner of display become meaningful signifiers, often exceeding their function as mere intermediaries. For Mayer, textiles serve as methodical testimonies, in which the concept of the pattern is inextricably linked to the concept of structure and must always be formed in order to become legible. For Field of Codes, she dealt with the history of the Kölnische Gummifäden-Fabrik (Cologne Elastic Factory), formerly located at the current site of the PiK.

Max Schaffer understands his work as process-oriented, experimental arrangement within communication systems. He uses this process of arrangement to investigate the societal relationship between humans and things and the public and institutional spaces they inhabit. It is characteristic of Schaffer’s exhibition practice that he develops direct, on-site interventions as supplement to the work he brings from off-site. In 2012, he stole Vienna Secession’s ventilation system when it was lying next to the construction disposal area in the exhibition house’s courtyard. The work Excessive Access (2015) came from the same context. Ten metal discs were cut from Secession’s recently installed ventilation system to accommodate its network of pipes. In the exhibition space, the discs now indicate a connection between the interior and exterior and can be read as an ironic reference to a minimalist design language. Schaffer appropriated these relics from an institutional context and presents them as flexible markings spread out across the walls of the exhibition space. With the transformation of a functional system into an aesthetic one, he addresses questions of interpretation and expectation in the reception of art.

Marcel Hiller fills the exhibition space with steel units. These can be understood as counterpoints to the neu- trality of an exhibition space, whose pseudo-functionality points to something unknown in representation’s space of consensus. Where his earlier objects were often unprocessed, his new works merely have the appearance of found objects or waste products. These precisely crafted objects negotiate the concept of the sculpture every time anew. Hiller understands his objects as “nervous archives of structural protocols.” The focus is not directed at them but rather at what surrounds them. This includes spatial, architectural surroundings as much as a semantic space of codes and linguistic and pictorial signifiers. Grouped with readymades, the objects become improvising actors that map onto existing structures and speak to the fragility of institutional processes.
Sven Johne connects fiction and reality in his work to derive delicate and contradictory constellations. The protagonist in Johne’s film, A Sense of Warmth, wants to escape her digital, exploitative office-world to give her life greater purpose. To that end, she decides to take a job at a sustainability oriented ornithology project on a sunny, idealistic island nature preserve. She dreams of a new life in harmony with herself and nature, without exploitation and environmental destruction. In short, she dreams of a new life without capitalism. But her liberated escapism has its price. Using newspaper reports and individual accounts, A Sense of Warmth brings together the experiences of today’s drop-out generation with displaced imagery and narratives from the history of the GDR.

In his artistic practice, Julian Irlinger investigates the function and dissemination of photographs, texts, and other materials that he researches, collects, and assembles. He focusses on processes and mechanisms through which social, cultural, and economic value are attributed in late capitalism. In the work Props, for example, he attends to entry requirements for digital museums: On oversized lenticular prints, he crossfa- des the respective views offered internet users when visiting the museum homepage of the Frick Collection and the Google Cultural Institute. He is particularly interested in the gap that emerges between digital and institutional exhibition spaces. Given their presentation on metal structures, the lenticular prints undergo a dramatization that underscores the discourse in the printed images.

Are “democratic forms of protest” possible? Do they have contemporary influence on change and do they strengthen democratic value? Or are they only ineffectual forms of societal gathering without actual political influence, having slowly become mere public rituals? In his video May 1, Hiwa K interrogates the naiveté of forms of public protest in Germany from the perspective of a Kurd, who escaped an Iraqi dictatorship. From this standpoint, he reviews and challenges Eurocentric perspectives in protest culture and their attendant strategies of subversion.